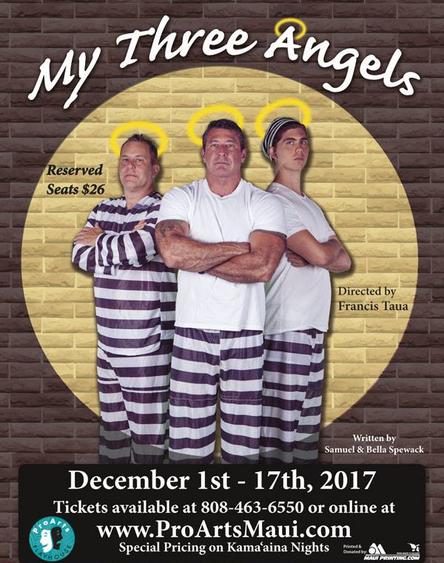 My Three Weeks as Convict: Lessons in Life & Business from a First-Time Actor

"After I strangled my wife," I shared in despair. I never thought I'd say these words. I feel chills writing them now. Although, 2 months ago I didn't know I'd be playing Jules, a double-murderer in the play, My Three Angels.

This is my blog about my three weeks as a convict. In October I auditioned and was cast in my first scripted play, My Three Angels. I'll be performing for over 1000 people over the course of 12 nights in December. I play one of the three angels, who helps a family over Christmas time. It is your traditional heartwarming holiday story. I also happen to be a double murderer- a convict.

I share my story because you might see some of you in it. I realized that in stepping way out of my normal routine into the creation of something new, there are many wonderful parallels to life and work... lessons that I can see easily now from a new lens. It especially enlightening given my work as a sales and leadership trainer/coach. I teach new ideas and help people change behavior to create better results. Now I'm in the vulnerable place of learning something new. It's important to remember what this feels like as I help my clients.

I've had so many lows and a few highs on the road to opening night.

Discovery One:  Wow, this is vulnerable. There is so much I don't know, and I don't know if I can get there in time. Ever have that feeling? You are preparing for something big. You start late and you're not sure if you can get there in time? You're not sure if you'll be prepared. It's like that dream that you're back in high school and you're taking a test that you haven't prepared for while sitting in your underwear.

That's the feeling I've been having for much of the first 6 weeks of rehearsal. I received a 74 page script, and I'm on stage for 52 pages speaking words and moving my body (acting). I have to learn all the dialogue. Others are counting on me to be precise.

After I auditioned and was cast we began with our first table read. It was amazing. I read my part and received laughs, and laughed at others. I was excited to learn my part and perform. I was anticipating receiving guidance from the director, laughing with the cast at our mistakes, and taking my bow at the end of the shows.

But as the weeks went along it became much harder, much, much harder than I ever thought.

Discovery Two: There are moments, I’m going to feel like an idiot. After some initial discussion about how our characters relate to each other we dove into Blocking. During Blocking the director tells the actors where to move as we speak. Sounds simple, right?

Although the blocking exists in the script I was given, directors will often create their own blocking based on the stage and set they’re working with. My director changed 90% of it to fit our show. Often it improved a scene, and …

The was a very time-consuming process, and for me very challenging. I had to walk and talk at the same time. As a first-time actor I’ve never had to learn script, let alone where to stand as I spoke memorized lines. (I’m the guy who switched teachers in 10th grade English after learning we had to memorize and perform 18 lines of Shakespeare).

During the weeks of blocking, I’d bumble or mumble my lines while making notes in my script of where to be on stage. It reminded me of my attempts at yoga. I know it’s beneficial, yet my body doesn’t naturally move that way. I get upset when I see others doing it with ease, I’m bored along the way, and I watch the clock to see when it will end.

I felt this way with blocking. Additionally, it was too many details for my pretty head to hold onto at times. (I like to know the big picture first). One particularly frustrating moment occurred as I was acting in a scene with the villain of the show. (He’s adept at bringing the villain to life).

I was clearly struggling and after the third time of either walking into him or speaking at the wrong time, he finally said, “you don’t have to do anything- just let me act.” I felt so small… I felt like an idiot. Wait- aren’t I doing this for fun? Why am I here?

But here’s the thing I finally remembered… it’s often part of the learning process to feel like an idiot at times. If you don’t you’re either a supreme being who has mastered the art of non-judgment or you don’t care.

It’s how I handle the initial feeling of being awkward, the feeling of idiocy that makes all the difference. I started to remember what I preach to my clients during workshops and coaching. Relax, breathe, laugh at yourself, accept this part of learning. It’s the only way to learn something new.